I love to hate the polls, especially on Twitter. However, I appreciate that early season polls are tough. Your returning champs haven’t played a game yet, while Utah has ripped through 2 top 10 teams. How much do you weigh last year vs this year when you have a relatively small sample size?

If you ask me, you embrace volatility. Give deference to the teams that have played, diminish last year’s results a bit and be willing to change again with more information.  So for me, early season is a combination of both, with a heavier weight on this year’s results.  I don’t really care what the pre-season poll says (mostly because I think it’s an exercise in ranking last year’s teams anyway).

With that said, I can’t complain about the polls without publishing my own. Although I can choose to stop at 15 because:

If you are mad about my rankings, take heart in the fact that I wrote them at lunch. But also be a little mad because I do know what I’m talking about.

These don’t matter. At least they shouldn’t. The great thing about my rankings is that I’m willing to throw away bad rankings with better information. One of my biggest gripes with the MCLA poll is that it starts with the pre-season poll and then it’s a season of rearranging without every really “throwing away” the pre-season poll.  If I have better information, then next week you will see it reflected in my power ranking.

As always, if you strongly disagree, or would like to tweet me angry gifs do so @jhlacrosse.

Two top ten teams ripped apart in one week. Last year the question marks for Utah were at faceoff and defense. Both look significantly improved. Oh yeah, and their offense is better too. We’ve seen teams start hot against good teams before and falter along the way, but Utah’s schedule will let them prove themselves. I have no concerns letting them wear the crown early in the season. They’ve done more than anyone to earn it.

BYU still has that 1984 National Championship tho, Utes.

Their impressive weekend was overshadowed a bit by Utah, but they also kicked-off the season with 2 statement wins. Wins over Cal and Oregon. The Cal win looked better before Utah shredded them, but hey, maybe ASU wore them out for Utah?

ASU heads to Oregon to take on Boise State and Colorado State, naturally.  CSU could still be figuring things out after graduating 14 seniors last year. Good time to knock off a team that could rebound later in the season.

Chapman has a super small sample size, a 17-0 win over a weak UCLA team.  Next week there will be a much more informed opinion on where they stand after they take on Georgia Tech and Boston College this weekend in Georgia. If you give points for traveling, they get full marks for jumping all the way across the country in February. Dylan Gardner started off the year with 6 G’s vs UCLA. Having coached against him I can attest to the fact that he is stupid good. If I had a Godekeraw watch list, he would be at the top.

OK, cool, we got all the whining out right away. If you ask me, they are under-ranked in the poll. They dismantled FSU, who I had predicted would be pretty decent. That certainly raised some eyebrows.  It’s not so much that they won, it’s how they won that’s impressive.

But what if FSU isn’t very good?  South Carolina’s at-large chances might ride on them turning it around. I embrace volatility in the polls, but the Gamecocks could see a steady slide in my power rankings as they play a pretty weak schedule the rest of the way. If Liberty can put together a run that would help, and SC needs to be FSU’s biggest fans moving forward. For now, let them have their moment. They get to be the early season team that climbed the polls early and slowly slid back as other teams put up bigger wins. Or maybe not? I’ve been wrong before. Once.

I can hear the anonymous tweets already. “You are SO bias!”. First, it’s biased. Second, I think this is a fine place for BYU right now. A win over UNLV is nothing to write home about this year, but it’s better than they did vs the Running Rebels last year. (I blame coaching. There is a reason I’m tweeting and not coaching now.) Scoring 19 is impressive, giving up 11 is a little yikes. BYU did play their first game without starting goalie Dalon Hampshire who adds an important element of stability to the young Cougar defense.

Much like Chapman, the Cougars can earn the ranking this weekend with games against Cal and Stanford. Cal’s showing at the Pac 12 shootout doesn’t do the Cougars out of conference schedule any favors. Texas and FSU dropping also hurt. In the end, it won’t matter because the MCLA Championship goes through the RMLC this year.

There is probably a strong argument to have GT higher.  Maybe lower? But I think they are +- 2 spots from here right now. The Oklahoma win was probably uncomfortably close for the Jackets, and Ole Miss hung around for a quarter before getting run off the field.  If the Jackets take care of Chapman and BC this weekend they will be top 3. These games are big for a team looking to reload after losing some studs.  It would be nice to have 3X First Team AA Will Byers anchoring the defense this weekend, but apparently, the MCLA is unyielding in its 4-year rule.  The backline is going to need to step up against the Panthers and make a strong early-season statement.

I’m for sure getting a tweet from @gcumlaxfan for this one.  But take heart, Lopes fans! It’s only because GCU hasn’t played yet. And also I think they are tasked with filling some serious holes from last year’s championship team. The Lopes have to find a way to replace 11.21 points per game on offense, and the anchor of the defense last year, goalie Alex Larson, curiously isn’t listed on the MCLA site roster.

In my opinion, the Lopes won’t be able to lay claim to the #1 spot until March 24th when they play Colorado. The schedule until then doesn’t include any top 10 matchups. That’s projecting a lot. Mostly that their schedule stays sub-top 10 (which it probably will if GCU goes undefeated through it), and CU continuing to be a top 5-10 team (solid bet).

You can tweet me angrily that moving GCU from 1 to 7 is a travesty, but I never had them there to begin with.

Note: If this used as locker room fodder, please be sure to take a picture or video and send to me. If I’m not riling anybody up then what’s this all been about? /CreedThoughts

Michigan State feels similar to South Carolina, but without the pizzaz and between-the-legs shot gifs. They currently have 2 top 25 wins, both of which are in peril of dropping out with another loss or two. Unless Boston College can pull off an upset this week in Georgia they will likely be out by the next poll. Cal was looking like a sure bet for a top 5 game that the Spartans could afford to drop when the season kicked off. With Cal’s fall, Sparty’s margin for error has gone with it. Cal, Virginia Tech, and Liberty are the only potential top 15 games left on their schedule. Maybe Davenport climbs up?  With a relatively weak schedule, they don’t have a ton of margin for error to keep pushing higher in the polls. A loss to any of those teams would likely stagnant them in the 10-15 range for the rest of the season. Maybe lower?

That said, maybe Minnesota and Boston College put together a little run and climb the rankings? Sparty should be cheering for that.

I don’t think CU is the 9th best team in the league, but right now their only two wins are over two RMLC teams who won’t make the conference tournament. In two weeks we can properly slot the Buffs. My guess is it will be higher than this.  The cupboard is well stocked for CU, but replacing Gonzalez AND MacIlvennie (who isn’t listed on the roster, despite being a sophomore last year) is a tall task.

This has potential to be a “Ewing Theory” year for the Buffs, where they showcase a higher overall team talent without the superstars. Or maybe they end up missing having some “go-to-guys” in close games. Either way, recent history has taught us that you probably shouldn’t count out a Galvin-coached team.

It’s not the start the Bears wanted, but they can take solace in the fact that both their losses were at the hands of the teams I have ranked #1 and #2.  They probably won’t find any solace in that, actually.  This weekend is huge for the Bears. This is potentially their last swing at a top 5 team when they face BYU on Saturday.  Michigan State and Cal Poly will both be great games, but Saturday may be their best shot at a “marquee” win.

Nobody REALLY knows how good Utah is, but Cal hung tight with ASU. Playing the Devils is always taxing, and they played Utah 24 hours later. Maybe it was a close-loss-hangover moment? Maybe Utah really is just that much better? Either way, if you are the Bears you can’t linger on last weekend. All eyes on the Young(ish) men of Brigham. (Go Cougs!)

Best of the Rest

Quick thoughts on the MCLA Poll 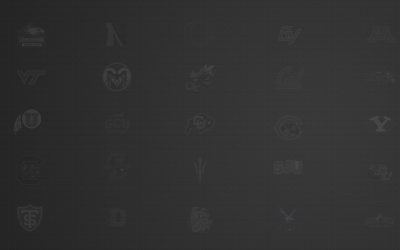 Week 4 Power Rankings - The Upside Down